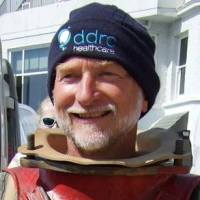 I started recreational diving in the late 1960's and developed a keen interest in the marine environment. In the early 1970's I joined the Royal Navy, where I gained my first experience as a working diver after qualifying as a Ship’s Diving Officer. On leaving the Royal Navy, I worked in the inshore diving industry for a while before joining the Devon and Cornwall Police.

My introduction to DDRC (as it was then known) was as a volunteer chamber attendant and operator during the early 1980's. I continued in this role through until the late 1990s. At that time I was working as a Police Diving Supervisor and occasionally as an instructor at Fort Bovisand Underwater Centre. On retiring from the Police Service in 2004, I became a member of the DDRC Healthcare bank staff and in January 2005 took on the full time role as a Training Officer at DDRC Healthcare.

During my previous career was in the police service I undertook a variety of roles other than diving. Most significant to my work at DDRC Healthcare / DDRC Professional Services was as an operational manager, trainer and course director.

In my free time I enjoy walks in the countryside with family and dogs. My wife Lyn walks police dog puppies, which is often entertaining. My main interest is underwater exploration, of both natural environment and cultural heritage. I also enjoy flying light aircraft and have held a private pilot’s licence since 1995. I currently own a share of a vintage aircraft based at Bodmin airfield.

Book a Medical Book a Training Course
Emergency
We use cookies on our website to give you the most relevant experience by remembering your preferences and repeat visits. By clicking “Accept All”, you consent to the use of ALL the cookies. However, you may visit "Cookie Settings" to provide a controlled consent.
Cookie SettingsAccept All
Manage consent